Statia is a small island with a large history. From the anchorage you will see a long cliff just behind a sandy beach. At the base of the cliff a couple of buildings are nestled between old stone ruins, which tumble into the sea. On top of the cliff the present small town peeks out through trees. To the east a perfect volcanic cone rises to 2000 feet. Ashore, a donkey grazes peacefully; little movement breaks the tranquility.

Imagine now, the Golden Era during the mid to late 1700s, when Statia was the trade capital of the Indies. From one to two hundred sailing ships lie at anchor. All along the shore a sea wall protects a long street of shops and warehouses. Goods are available here from all over the world: fine fabrics, silver, gold, household supplies, slaves, guns, sugar, tobacco, and cotton. Thousands of tons of commodities are traded daily in a colorful, noisy, bustling town, with hundreds of small boats going from ships to shore. During these years, the European powers were fighting each other; in addition, England was unsuccessfully trying to put down the upstart American rebels. The major powers wrapped their colonies in a mass of red tape and taxes, stifling trade. The Dutch, who owned Statia, remained neutral and opened Statia as a free port. It became possible to buy or sell anything here, along with the appropriate papers. Countries not allowed to deal with each other could deal with Statia, so Statian papers were attached to many things produced elsewhere. For example, in 1770 Statia produced about 600,000 pounds of sugar, but exported 20 million pounds. It was officially approved smuggling, and the inhabitants, some 8000 mixed Dutch, English, and Jewish merchants, got very rich. Statia became known as the Golden Rock, but the prosperity was not to last.

In 1776 the Andrew Doria, an American vessel, came into harbor and gave a salute. Governor de Graff, not sure what to do, decided to fire a return salute, but two guns less. He didn’t realize that, although Andrew Doria was a merchant ship, she was under the command of an American rebel navy captain. Thus Statia became the first nation to salute an American naval vessel. British officials didn’t think much of this, and even less of the fact that an American ship later captured a British ship in the area and took it back to the States. This, plus the fact that Statia sold weapons to the rebels, led to war between Britain and Holland.

Admiral Rodney arrived and Statia surrendered. He confiscated all the ships and warehouses, but found less cash and valuables than he expected. Rodney noticed that for a small population the merchants were having a lot of funerals. He ordered one to be stopped and looked in the coffin. It was full of coins and jewelry and a little digging in the graveyard revealed much more. He rounded up a hundred Jewish men for deportation. When his men searched them and ripped open the lining of their clothes, they found another 8000 pounds sterling. Rodney stole this too, before sending them to St. Kitts. He then held a giant auction that netted him and his crew a fortune. This was not too popular with British subjects who lost property. He was sued and questions were asked in parliament. Luckily for Rodney, he won the crucial “Battle of the Saintes” just in time and all was forgiven.

By the late 1700s Statia was again Dutch and trade was flourishing, but in the early 19th century the changing political and economic climate in the Caribbean ended Statia’s role as the Caribbean’s first shopping mall, and there followed a long decline and massive emigration. The sea wall, which had been built on sand, slowly sank and subsequent hurricanes destroyed the lower town. The last ruins can still be seen.

Every time I return to Statia it looks better. The historical society, with funding from Holland, has done an excellent job of restoring many of the ruins and old buildings. It is also getting busier – traffic for the first time is noticeable. The American medical school helps stimulate the economy, as does a big oil storage depot in the north of the island. Many of the 3400 inhabitants originated in Statia, but immigrants from all over the world have filtered in recently so Statia is quite a wealth of people and languages. They all welcome visitors with genuine warmth. Statia is so far off the beaten track that the very few visitors you meet are likely to be interesting. To put icing on the cake, the scuba diving is impressive, hiking is great, and there is a selection of enjoyable restaurants. 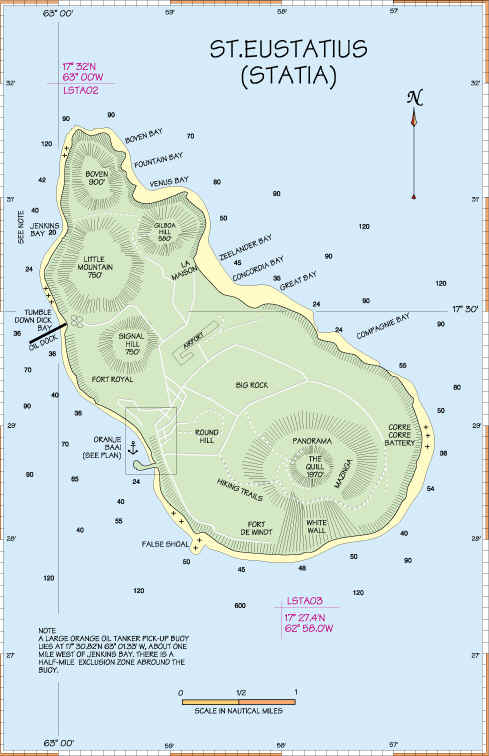 Other Sites of Interest

Saba and Statia, The Forgotten Isles. A more detailed article by Chris Doyle