For the sailor, St. Barts has the allure of a small island whose economy and well being have always been intricately bound up with its picturesque port. The island itself had little to recommend it in the early days for settlement, as the rainfall is insufficient to support agriculture. However, St. Barts is strategically placed in the middle of the Lesser Antilles. Its fine small harbor and several sheltered bays made it important enough to be fought over by the British, French, and Spanish. It prospered under the French in the late 1600s when it was used as a base by pirates who came here to spend their quickly-gained fortunes. The most famous of these was Captain Montbars, a Frenchman who was so horrified by what the Spanish had done to the native populations that he decided to avenge them, doing well while he did good. He took on an indigenous crew who, no doubt, felt somewhat bitter, and did so well he became known with some terror as “Montbars the Exterminator.” He finally disappeared in a hurricane and it is thought that his treasure is still buried on the island, though it is more likely that it was spent on the island.

In 1784 the French gave St. Barts to the Swedes in exchange for free port rights in Gothenburg. The Swedes made it a free port, which it remains today. It had a second period of prosperity as a trading center during the American war of independence, when American rebels came here for supplies.

During the hundred years following 1852, its fortunes fell owing to changing trade patterns and several hurricanes. The Swedes sold St. Barts back to France in 1878 and it remains part of France today, though, like St. Martin, it is a free port and so somewhat special. Over the last 30 years this free port status has resulted in an astonishing economic recovery. At first it was mainly inter-island trade. Small motorless sailing sloops would arrive here from down island and load themselves to the gunwales with alcohol and cigarettes to be smuggled back home. Although the customs officers in their home ports were properly taken care of, the return journey was nonetheless a long and hazardous sail to windward. The smugglers’ biggest problem was to evade the customs men in St. Kitts and Nevis who would happily confiscate their cargo, no matter its destination. To keep out of their way, many would sneak by night through The Narrows, the reef-filled passage between St. Kitts and Nevis.

Today St. Barts is going through an unprecedented renaissance. With its sharply contoured rocky hills, a picturesque port, and gorgeous beaches, it has become a world famous chic destination; the favored hot spot for the good looking, well-to-do “in” crowd, seasoned with a sprinkling of acting, singing, and sports stars: the Riviera of the Caribbean. Through all this development, St. Barts has happily managed to keep some integrity of architectural style, and is still quite charming. Sociability reaches a crescendo around the New Year when a hundred or more superyachts arrive for festivities that include a spectacular fireworks display.

St. Barts has some excellent cultural events. These include a music festival (classical and jazz) near the end of January, and many art shows, as well as carnival (visitors are welcome to join in). The day after carnival there is a mock funeral when an effigy of all the evil spirits is buried.

The Caribbean film festival in April is excellent and there is a festival of music and food in August, and a Flamenco workshop and show in October. November has both Swedish week (music and dance) and November 1 is All Saintes, when everyone decorates the graves. 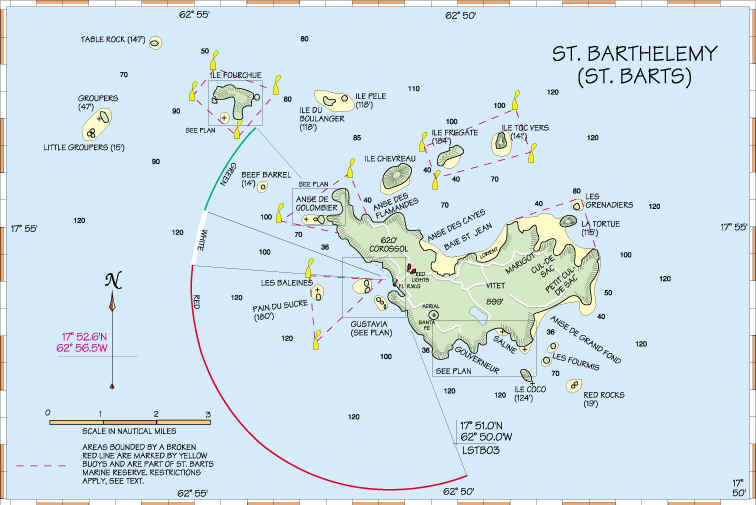 Other Sites of Interest