Grenada, a spectacularly beautiful island, has lush green mountains, crystal waterfalls, golden beaches, and the fragrant spice trees that give the island its epithet “Isle of Spice.” Come from late January to early March to get the added bonus of seeing the hills ablaze with hundreds of bright-orange, flowering immortelle trees: pure magic.

From a yachting point of view, Grenada was one of the first islands in the Eastern Caribbean to build a big marina (GYS) in the early 70s and thus became a major yachting base. This first foray into yachting squealed to a virtual halt when things got exciting with the transition to full independence in 1974. Most Grenadians felt this was premature, and instead of jubilant celebrations, the island was on strike and in protest. Nonetheless, independence was thrust upon her, and Grenada came of age under the rule of Sir Eric Gairy, a flamboyant and controversial figure who had a very divisive effect on the population, resulting in the l979 left-wing coup by Maurice Bishop, who greatly admired Fidel Castro. Bishop attempted to turn Grenada into a socialist state, improving medical care and education, but he did so at the cost of freedom: anyone who opposed him was thrown in jail, and all independent newspapers were banned.

However, this didn’t insulate him from opposition within his own ranks. Second in command, Bernard Coard, his wife Phyllis Coard, and members of the army took Bishop prisoner. After a massive crowd freed him, an army group executed him along with half his cabinet. At this point (1983), the US, along with Grenada’s eastern Caribbean neighbors (the Organization of Eastern Caribbean States), launched a “rescue mission” and were welcomed with open arms.

During this time yachting almost died down GYS became a moldering ruin.

Now, some 30 years later, this is old history, and looking back over the last 30 years, Grenada, as an independent county, has experienced the best, most democratic, and most productive age since it was colonized. Grenadians are a warm and hospitable people, exceptionally so once you get off the main tourist route.

There has been a great resurgence in yachting; haul-out facilities were built in St. David’s and Prickly Bay. Another is just being completed in Clarkes Court Bay. Other marina facilities have been built  in St. George’s, Clarkes Court Bay, True Blue Bay, La Phare Bleu Bay, Prickly Bay, and Mt. Hartman Bay. Two big chandleries  supply yachting gear, and legislation has been passed that encourages yachting by allowing for low-duty supplies, parts, and chandlery for yachts.

Grenada is host to a few important yachting events as well as smaller club races, and has a strong marine trades association called MAYAG.

Few islands are as photogenic as Grenada, with little houses surrounded by flowers, mountain rivers, and rainforest. Sometimes when you are hiking along a river amid nutmeg trees, it has an uncanny resemblance to early pictures of the Garden of Eden. A swim in one of the waterfalls will leave you feeling wonderfully refreshed, your hair and skin seemingly extra soft. Concord Falls are in beautiful countryside, and anyone with a spark of adventure should hike the extra half-hour to the upper falls. Seven Falls are the best, most secluded, and difficult to get to (a one-hour muddy hike), and you need a guide. Concord and Seven Falls are on private land, and the owners levy a small charge.

The most spectacular road in Grenada is the road that runs from Gouyave over to St. Andrew. It splits in two at Rose Mount ~ the Belvedere road is better maintained, but when open, the Clozier road is prettier. Both run right across the middle of Grenada through verdant agricultural land with spectacular mountain views.

Grand Etang is a crater lake, and the Forest Center is close by. Trails are laid out so you can wander into the forest. There are wonderful hikes, including one halfway across the island (four hours).

The countryside, which took a beating in hurricane Ivan in 2004, is  recovering well, ad hiking is magnificent

Grenada has its own organic chocolate factory started by the late Mott, who was also a yachting enthusiast. They make a high-octane bars  of various flavors. Melt them slowly in your mouth for an intensely rich, creamy, chocolate flavor unlike any other commercial brand. Better still, come visit the Belmont Estate, a typical and very picturesque country farm where the cocoa beans grow.

In my youth I used to keep an eye on a coconut plantation for a friend. To get there I passed the River Antoine Rum factory, where they made a strong white rum called Rivers. I immediately fell in love with this place ~ it still runs much as it has since the mid-1800s using a giant water wheel to crush the cane, the dry stalks to heat up the juice, and large wooden scoops to manually move the hot juice from one big cast-iron bowl to the next as it gets hotter (they call these bowls “coppers,” as the original ones were made of copper). To my delight they have now opened this estate to visitors and offer tours for the very reasonable price of $5 EC, which gets you a full explanation and a taste of the rum. However, go when it is all running, and, as this is not every day, call in advance to find out (442-7109 or 442-4537).

If you prefer the adventure and economy of a great hiking guide who gets everywhere by local bus (this makes for easy one-way hikes across mountains), contact Telfour Bedeau (442-6200). He knows hikes all over Grenada. This works best when you are anchored near a bus route. 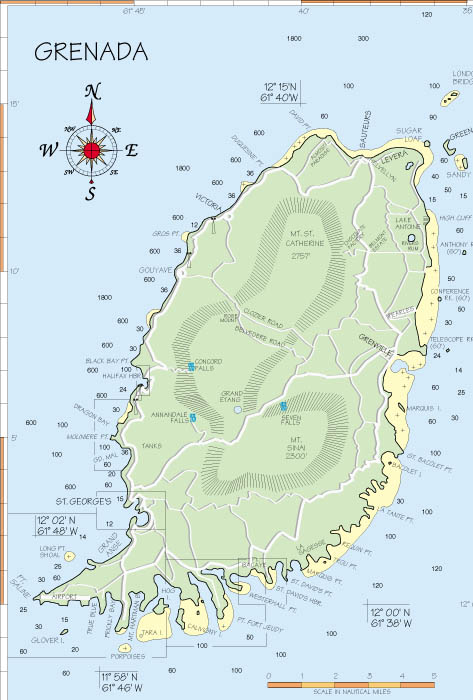